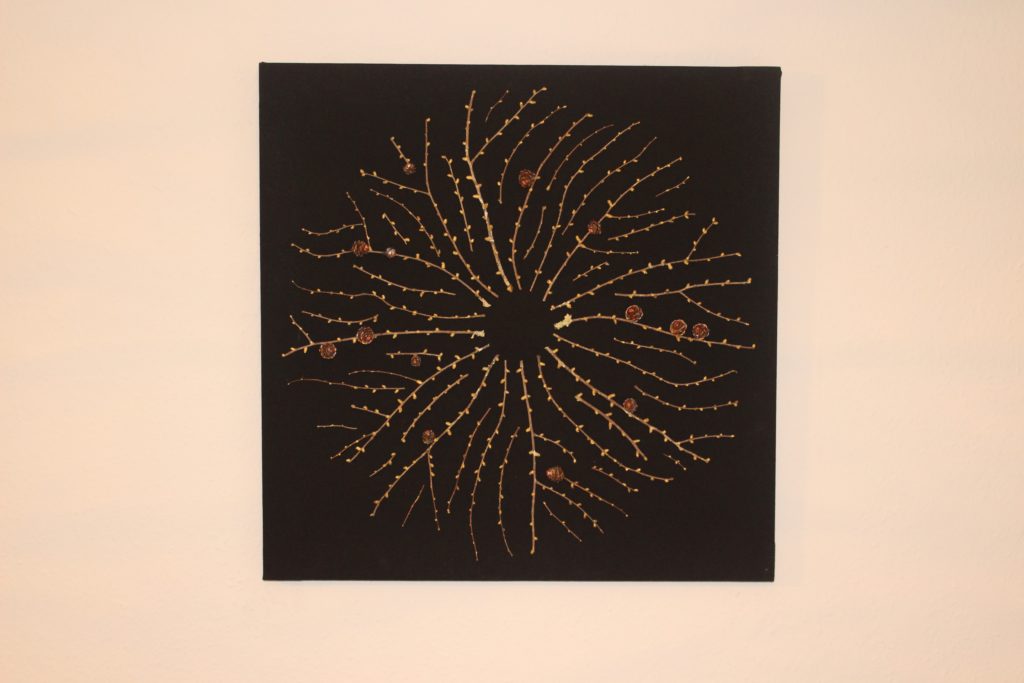 Penzance is the most exposed place I’ve ever lived. We have such huge storms, many at night. What’s often more disconcerting than the storm though, is the eerie calm that settles in the morning after. All is quiet, everthing so still; it feels like even the air is sleeping.

I love to go out in this morning-after calm. It’s a relief that the world still there; that it’s a place where we can walk safely again. And there is so much gorgeous plant detrius littering the paths…my son, Gabriel, dances around finding goodies to fill his pockets.

It was one such morning that the two of us came across a large branch at the foot of a tree. Gabriel picked it up triumphantly – he wanted to wield it, to carry it home; it was his treasure!

I had never brought any branch so big into the house, but I couldn’t say no to my son’s enthusiasm, so home with us it went. Having just moved into a new, in-need-of-decoration place with no art on the walls, I strung it up on one of the many picture hooks dotted around. 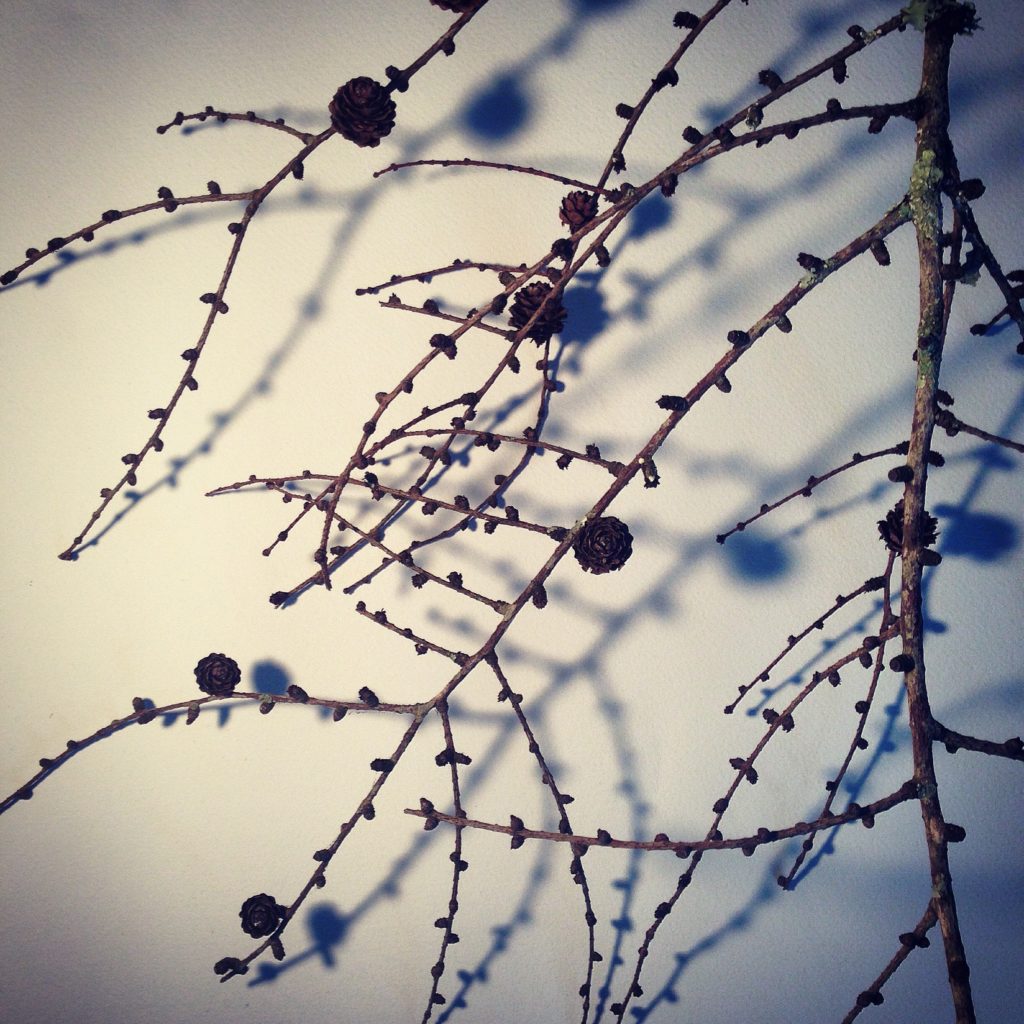 And there it sat…

I saw it every day. It was beautiful, all of it: the way the lichen embraced patches of its bark, the way the lines played with each other, the shadows that were cast on our wall. It became my treasure. I knew that I was falling for it; that I wanted to create with it…but I didn’t know what. 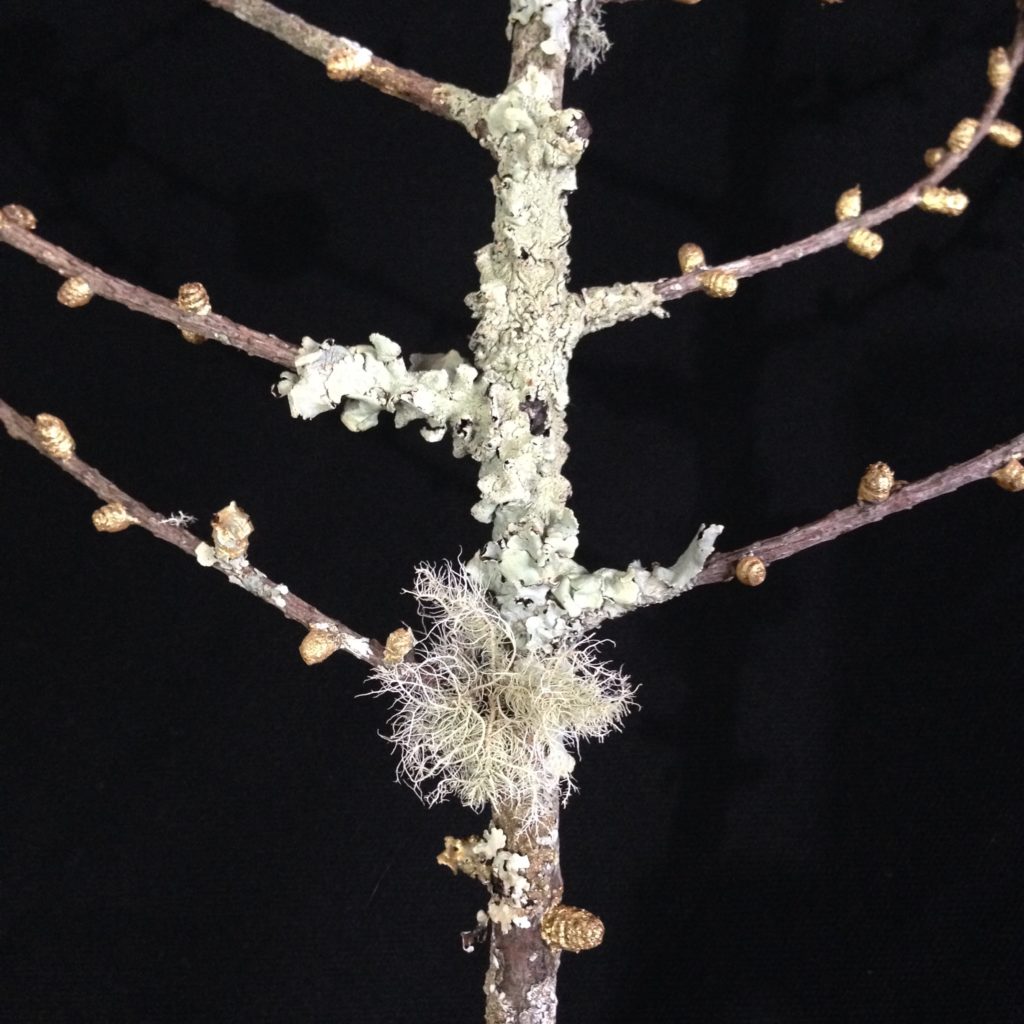 That not knowing was an uncomfortable feeling for me. I like having my ‘i’s dotted and my ‘t’s crossed. I am not used to having things hanging. But I let it be. I gave space for something unconscious to grow inside me.

And almost a year later, its time came. I was ready. I took it down and carried it to my studio.

Developing, had been the feeling that I wanted to adorn this branch with Mica, the naturally-occurring sparkly mineral. I mixed some into my home-made milk paint and started. The gold punctuated the deep bark colours; I felt as if I was honouring the branch, the tree, the storm as I painted. 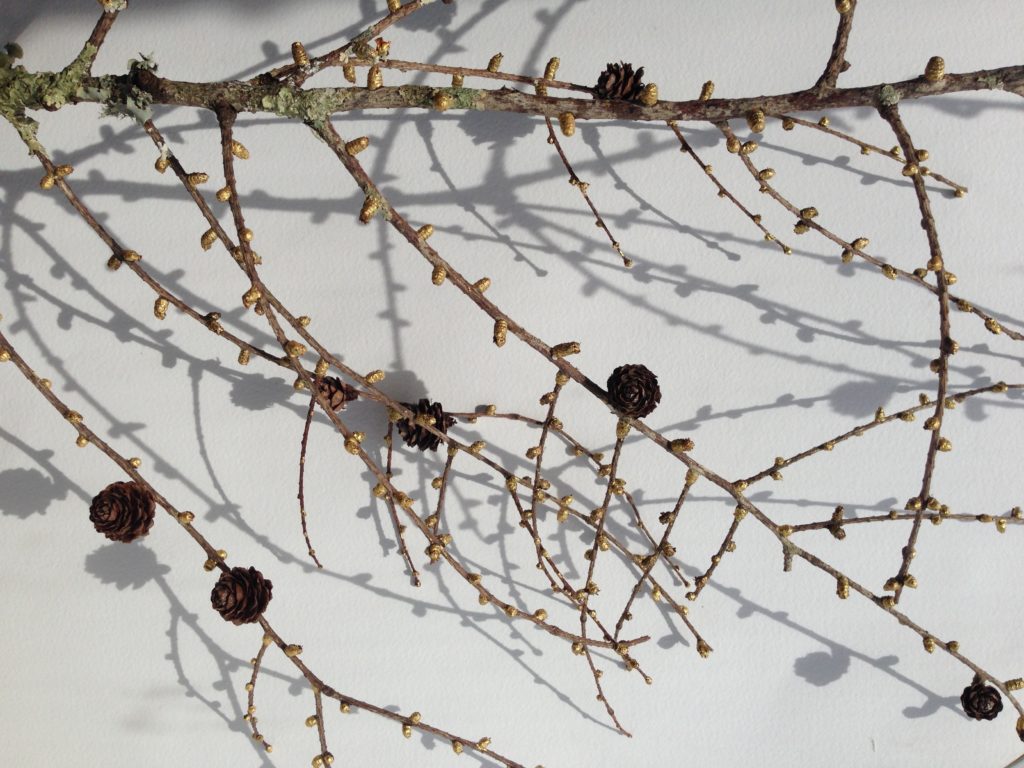 And then I moved onto the cones, using four natural mica shades to bring them to life. The work was delicate, long and mesmerising. 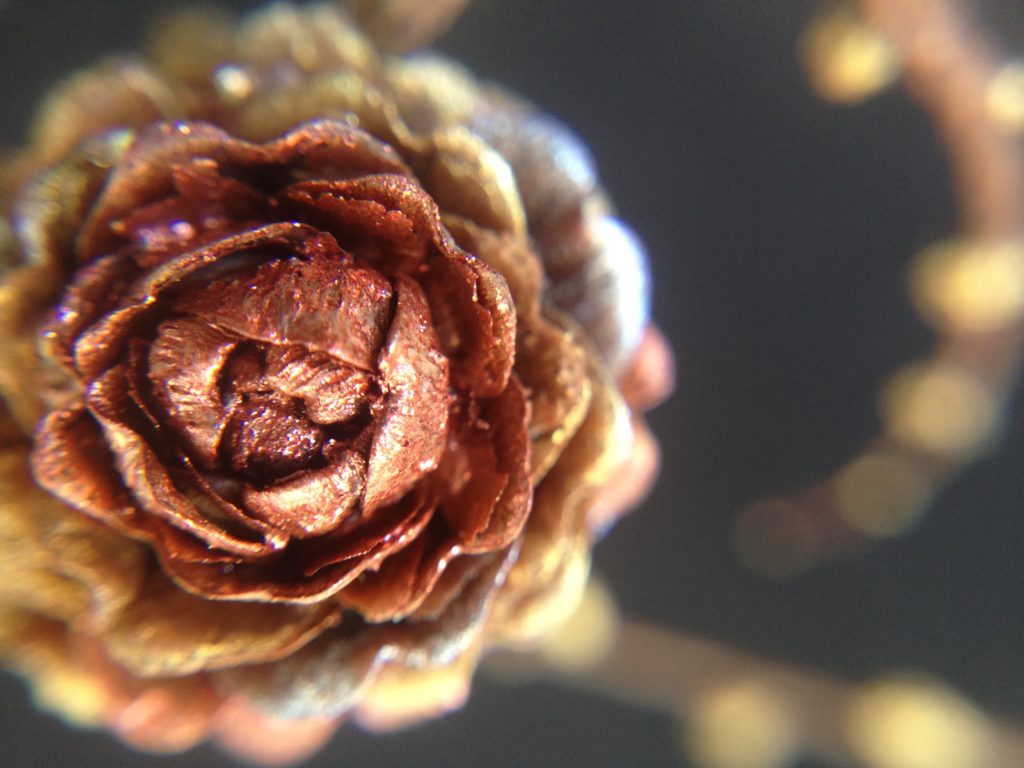 I’d previously assumed I’d keep the branch as it was structurally, but once it was adorned, I felt there was a shape other than the one it had naturally that wanted to come out, though I wasn’t sure what. Sitting in that uncertaintly, I took a deep breath and cut the twigs with my secatuers.

The pile of branches sat on my studio floor for quite some time! I arranged and re-arranged. I kept going back to the idea of a circle, so I decided to make a template and place the branches on it. 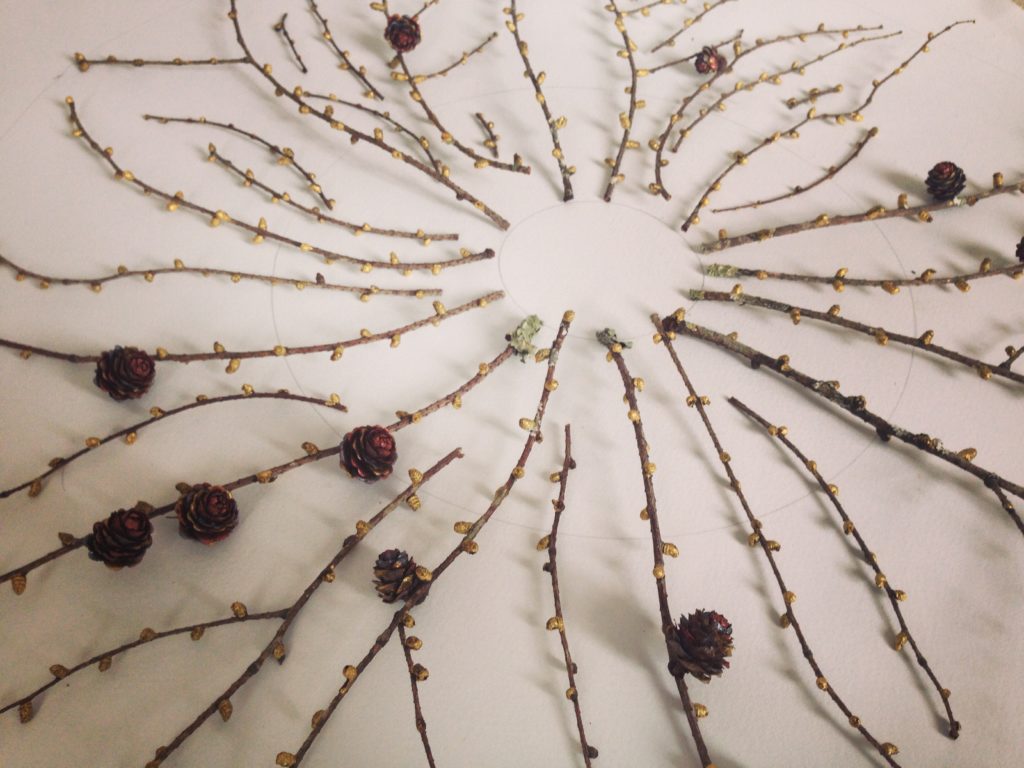 Up until this point, all of my botanical work had been laid onto white. But the mica was lost with a light background, and placing it on an old piece of dark cotton I’d got from a charity shop, I decided a black background was the way I wanted to go.

The next challenge was how to attach it. I’d used natural glue in the past but I knew this wouldn’t work. In my piece 39, I’d experimented with copper wire, but I felt these twigs needed more flexibility. It was dawning on me that I was going to make my own fabric stretched canvas and then sew the branches in place. Both were things I had never done before. 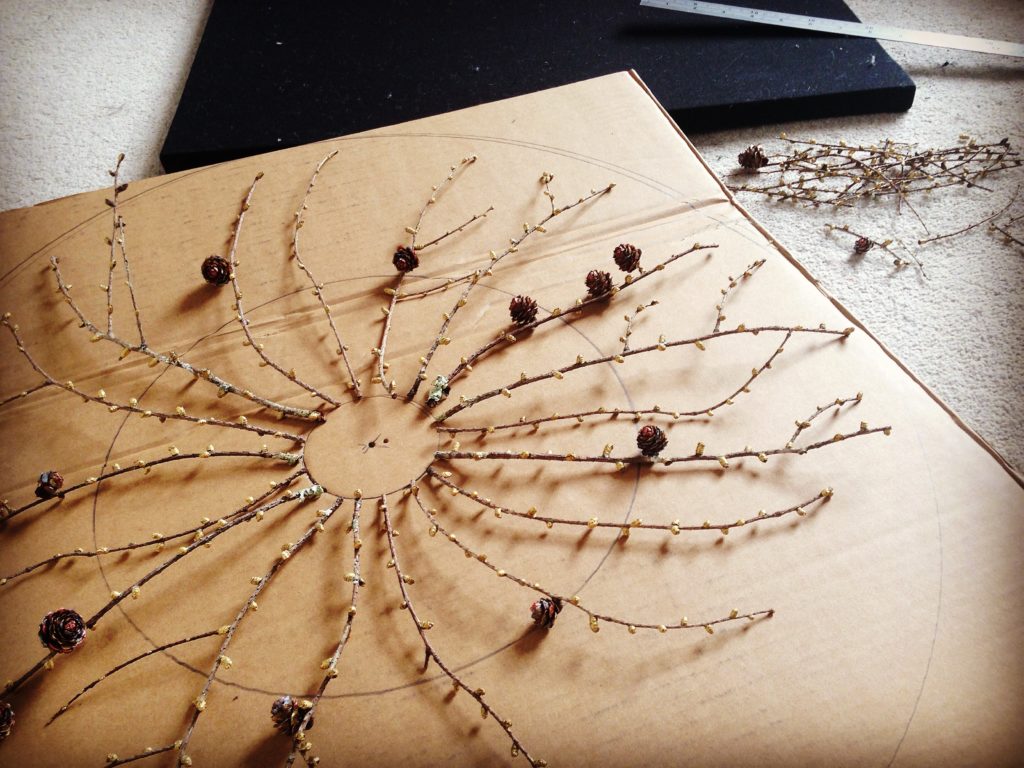 I found a frame big enough, borrowed a friend’s serious stapler and learnt how to stretch material over a frame. I then laid out the structure of the branches on my canvas, found some black embroidery thread and started sewing. 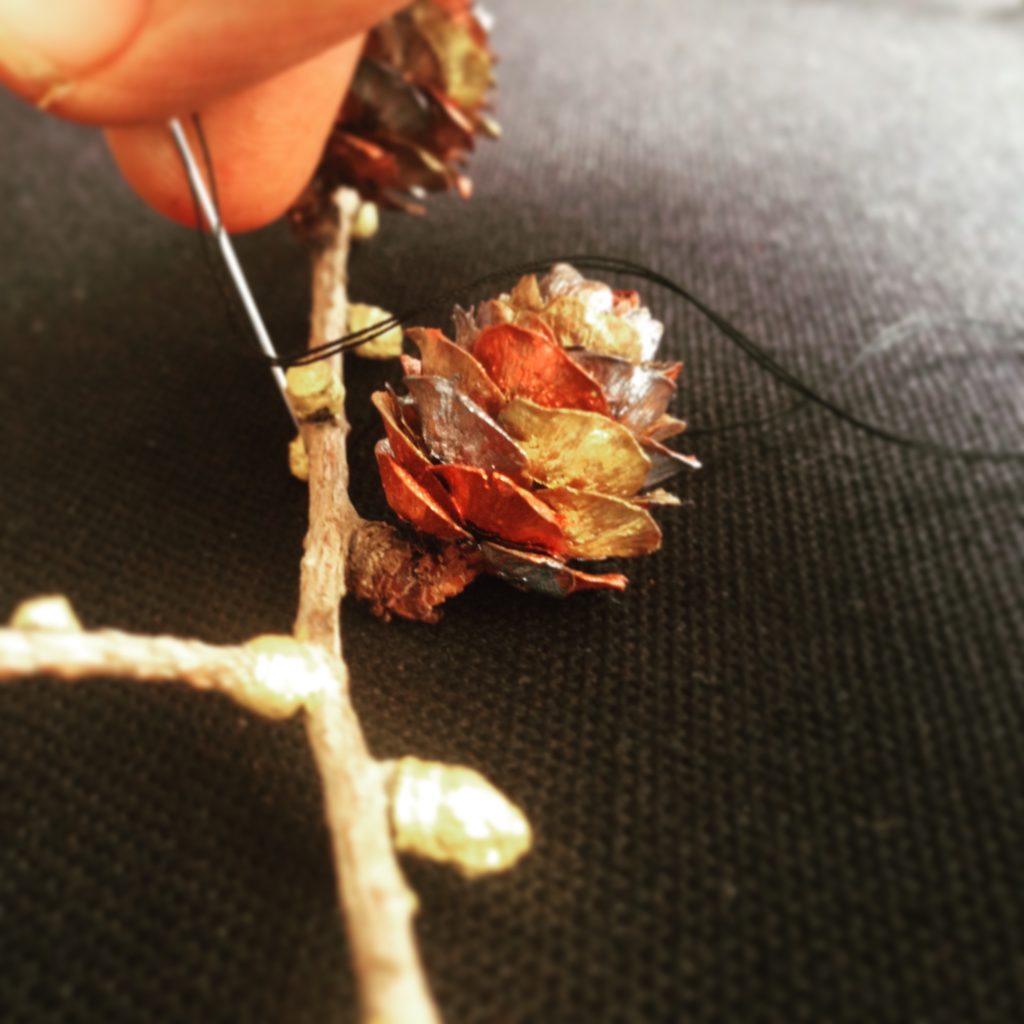 And it came together!

Slowly, the piece, ‘Treasure’, emerged. I called it so when I thought of every step of its creation.

The storm was a treasure – it brought my son and I this branch.

The walk to discover it was a treasure – these moments of toddler-dom and motherhood, even though sometimes they feel interminable, will be so fleeting.

The year of waiting was a treasure – the patience, the trust and all the little moments of my life that played out alongside it.

The moments of uncertainty, they were treasures – my hand shaking slightly as I held the secateurs ready for my first cut into the branch; the hours of arranging and rearranging.

Doing something meticulous with love, that was a treasure – the calm, meditative moments transforming my days.

Nature, that is my constant treasure – reminding me every day of our beautiful world.

The process of creating this piece reaffirmed to me that I am deeply blessed.

And every day, if I can consciously direct my attention to that blessing, I’ll realise in joyous moments, just how much treasure is all around me. 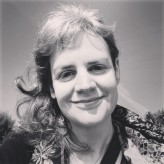 Do You See What I See?

Belonging, starting again and getting clarity

My Natural Paint Starter Kit – What’s in it?

My first workshop and more…